Hello, my five year old daughter is pigeon toed. Do you have any suggestions to help her correct this as a dancer? I know there is a chance that she may grow out of this and she also may not. Thank you so much!

Great question as many young children are pigeon toed. You see it most commonly in a child under 2 years of age and that can occur from how the baby was positioned in utero with the foot and/or shinbone being turned inward. I have talked about external tibial torsion where a child’s foot and shinbone (tibia) is more turned out than their thigh bone (femur) is. This is the opposite called internal tibial torsion. It often starts to self-correct itself after the child becomes more mobile. I saw this recently in one of my grandsons, who now by the age of 3 1/2 is running and walking with much less toeing in than I previously saw.

The other main reason for being pigeon toed is how the thigh is placed in the hip joint. Being five years old now, this might be where your daughter’s pigeon toed gait may be coming from. The medical term is femoral anteversion and when your daughter is standing without thinking about it both her knees and her feet would turn in rather than having the knees and feet facing forward.

A child with femoral anteversion can easily W-sit as in picture on the right – and – teachers and parents should gently change their position when we see this.

Being in dance class can often help develop the rotator muscles at the hip which will help turn out the whole leg. This isn’t going to happen over night, and the child with a turned in hip has to be extra careful they are creating their turnout from the hip rather than turning out just the feet to make it look right. I’ve seen a LOT of early pronation problems in young children due to their desire to make their positions look more turned out than what they actually can create at the hip. That’s my main concern with a young dancer who comes into dance class being pigeon toed. He/she needs to work primarily in parallel (over toeing in) and not worry too much about a small first position.

My suggestions for you is to see if you can see where the toeing in is coming from and then encourage running, kicking a ball, regular outdoor play… along with taking dance classes.

I’ve read the majority of children self-correct this toeing in by the age of 8 – so she still has some time to repattern as she is going through various growth spurts and muscle patterning.

Happy Labor Day weekend! Many of you have already started back into the fall semester and others will start on Tuesday. I hope your fall is getting off to a splendid start!

Onto the question of the week….

I had the great fortune of attending your classes at the DTSC again this year. I was returning after having taken your class 5 years ago – after which I ran right out and purchased some pinky balls. Since that time, my father has taken up working out and has had many successes with that. He has had the occasional ache and pain however, to which I have recommended some of your ball-work. Although he listened, it wasn’t until the PT suggested something similar that he gave my suggestions some validity! I’m trying to get him to borrow my ballwork video that I purchased. 🙂

My question today is in regards to my daughter’s feet. At an early age, watching her on the sidelines and even in her own early dance classes – I took notice of something funky going on with her feet. Now, age 6, I have concern still. As she has taken some ballet technique and gymnastics classes – it has become more apparent that her feet appear to turn in while in action. She can stand in first, draw her leg up to passé and keep the knee back, heel forward as long as I remind her. When her movement is stationary or sustained she understands and tries to make corrections… yet when she is dancing her feet turn in..quite a bit. A simple leap – toes turn in, a small arabesque – turned in, on the uneven bars her teacher called me over before coming to the conference because when she circles the barre – her foot turns in. I’m beginning to notice it might be in her right foot more then the left. The pediatrician looked at her feet at the 5 yr. and 6 yr. visit and has determined she is turned in slightly – but it is mild. Although she may never be a professional dancer – it is difficult for me as a dance teacher to see her little feet so turned in when she dances. Should I be concerned or not? Is there anything I can have her do at home to help? What type of orthopedist should I be looking for to look at her feet? If her feet are mildly turned in – is there any concern I should have other then dance related?

Lovely question! Turning in of the feet or pigeon-toed can come from three different areas – at the feet, the shin bone, or the hips. Let’s take a look at each one individually. 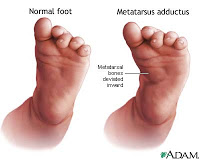 When the feet turn in at the feet it is called metatarsus adductus . This is where the bones of the feet turn in. Typically, this is caught before the child even begins walking and the doctor would have suggested massaging and stretching the feet as she grew. Since it was not caught when she was really young, I would rule out this cause for your daughter’s turning in of her feet.

Internal tibial torsion, which your daughter might have is where the shinbone rotates in making for a pigeon-toed walk. This isn’t unusual in toddlers and preschoolers, and often corrects itself as they become more active in running and walking – the 5-6 year old stage. Sometimes toeing in lasts into the school years, but usually isn’t a problem. In fact there are some sports that favor internal rotation, such as martial arts, soccer, and sometimes basketball.

If the toeing in was happening just from the shin you could sit your daughter on the edge of a table with her knees facing forward and you would see a clear inward rotation of the shin bone – as in the picture to the right.

When the turning in is coming from the hip it is called anteversion. The normal range of turnout and turn in at the hip is 45 degrees for both. When you have more turnout it is called retroversion, when you have more turn in it is called anteversion. This is a structural situation where it describes the angle of the neck of the femur to the shaft or long body of the femur or thigh bone. If you test your daughter’s range of motion at the hip by lying her on her stomach that might give you an idea if she has some natural anteversion.

A child with anteversion easily W sits – as shown in this picture. It will be interesting to find out what the relationship is between the two hips – are they even as far as their range, or is one more turned out or more turned in. This is very common, and while it isn’t a significant issue, you would want a young dancer to create her first position based on the lesser turned out leg, rather than the more turned out leg.

Watching the recent Olympics and especially the gymnastics competition, I was struck by how many of the gymnasts had a slight tendency to turn in their feet on the balance beam as well as on the floor routines. No one would ever say that their line wasn’t beautiful and elongated – even if it wasn’t as turned out as what the dance world would like.

All in all, I think I would take a look at these 3 areas on your daughter, see if you can get a better idea where her toeing in is coming from – and then encourage her to be as well-rounded and active in all ways as possible. At 5-6 years of age, I’m prone to suggest going light on the amount of turnout emphasis and focus on the alignment of the hip, knee and foot – which is what you are already doing. Since she can do that when she thinks about it – my intuition says she will improve her ability to automatically line her legs up as she gets older and better able to maintain that specific focus during class. Now you have a way to periodically assess her range of motion and know better where to focus her attention.

Below are pictures of what normal turnout would look like, a retroverted hip (excessive turnout) and an anteverted hip (more turn in than turnout)